The Safe Bet by Shealy James 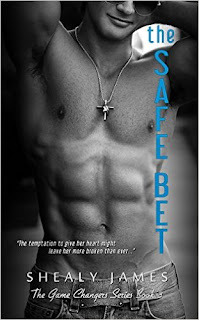 At the fragile age of eight, Reagan’s life seemed perfect. But when her beloved father abandoned their tiny family, Reagan was left emotionally scarred.

Now in high school, not much has changed. Reagan still won’t let her guard down. Not even for her long-time friend, Brock Anderson, who has spent years pursuing Reagan, yet never tearing down her walls.

If you push hard enough, eventually you’ll get your way...

By graduation, Brock has finally won over Reagan’s affections. They aren’t a public item, but Brock is content just being hers, even if that means going without the official boyfriend title.

As usual, Reagan’s fears get the better of her, and suspicions of Brock’s commitment creep in. Surviving their relationship’s tension, they make it to college together, where their game of cat and mouse takes a darker twist.

But after a tragic car crash that kills her best friend, her mother ships her off to the one person Reagan hates more than herself. Her father.

When she meets her brother she never knew, they immediately become friends. Years pass until one day when she meets one of her brother’s friends…Brock Anderson—and he’s on a mission to win her back.

When Reagan and Brock are reunited, the chemistry is stronger than ever. But when uncertainty threatens their future, will Brock be the safe bet, or will he be the heartache she always feared?

This book was a good read but was not very captivating. Don't get me wrong, I enjoyed it and wanted to get back to reading it but I did not spend my day thinking about it. Idid enjoy the game of chase but wish there had been more of that. It seemed like Reagan caved to fast and too easily when in reality, she would have fought more based on her past, Brock sounds like a great man that I would like to meet and hang out with!

If you want a fun read for a rainy day, this is your book! If you want something realistic that you can relate to, you won't find that here, but you can still enjoy the story.

**This book was given to me by the publisher in exchange for an open and honest review**
Posted by Unknown at 10:06 AM