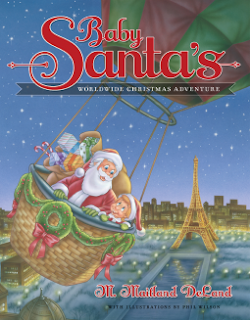 Description from the publisher:


"The presents are packed up, Santa is ready . . . but where is his magical sleigh? For the first time in history, Santa's sleigh is broken. Santa is grounded on the most important night of the year. How will children around the world get their presents?
Baby Santa, the youngest member of the Claus family, comes to the rescue. With his boundless energy, bright smile, and bouncy enthusiasm, Santa's son hatches a plan to save Christmas and have a traveling adventure at the same time."
I personally thought this was a cute book. The pictures are absolutely adorable! They are very colorful and catchy. The cover stands out and would capture my attention in a bookstore easily. In fact my son walked by, saw the cover on my computer and asked me if he could read that book because it looked so cool!
My favorite part of this book is that is shows a few countries around the world. It does not really talk about them but it shows a picture of America, Australia, Canada, ect. I thought it was neat to incorporate the countries like that. My son saw things in the pictures that he recognized and learned what country those items were in! YAY!!!
One critique I would give it is that the writing was too fancy. My son stumbled through it as he read because he could not tell what some of the letters were and it was confusing him. He is at that independent stage and wanted to read it by himself (he is in first grade but reads at a third grade level) but he was definitely getting frustrated with the fancy script.
Review from my six year old son- " This book is awesome! Baby Santa helped Santa and that is super cool! I loved that Rudolph's picture was hanging on the wall and the funniest part is that Baby Santa has RED pajamas!!!!!"
***This book was given to me by the publisher in exchange for an open and honest review***
Posted by Unknown at 10:00 AM