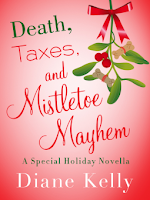 Description from the publisher:
Christmas is fast approaching when IRS Special Agent Tara is assigned a new case involving a jewelry wholesaler who’s repeatedly claimed large theft losses on her tax returns. Was Nadine Gramercy really robbed, or were the thefts a mere ruse to pocket tax-free profits? Tara believes Nadine belongs at the top of Santa’s “naughty” list. Her investigation takes her to Chisholm Trail mall, where she meets Fort Worth Police Officer Megan Luz and her fluffy K-9 partner, Brigit. Though Megan believes Tara is barking up the wrong tree, she agrees to provide backup if a bust goes down. Moreover, they decide to team up as matchmakers to find love for Chris Rasmussen, a pediatric nurse who moonlights at the mall playing Santa Claus. Chris has a warm heart and a body that’s hot enough to melt to the polar ice caps. This sexy-yet-sad shopping mall Santa was recently dumped by his fickle fiancée, leaving the not-so-old elf more jilted than jolly. Can Tara and Megan solve the crime…and lift Santa’s spirits in time for Christmas?

It took me a while to follow this book. It jumps between two woman and to me, it was a bit confusing but once I got past the first few chapters it was easier to follow. This book to me was slow to start but got more interesting as I worked my way through it. There was some mystery, a little adventure and a little comedy.

The characters were good. I enjoyed  watching the relationships grow  between Tara and Megan as they became friends. Brigit, the k-9 dog was hilarious.

This was not one of my favorite books but it was a cute read. Don't take my word on it though, I would love to know your opinion. What did you think of this book?

***This book was given to me by the publisher in exchange for an open and honest review***
Posted by Unknown at 10:00 AM