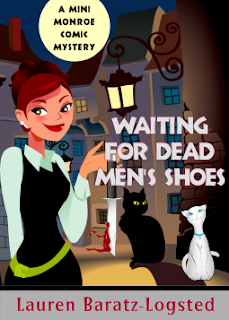 Description from the publisher:
"Underachiever Minette "Mini" Monroe has long dreamt of how much better life would be if only she were in charge of the world, said world being the independent bookstore in Westport, CT, where she's worked for the past half dozen years. After her beloved boss Colin Quimby is murdered, Mini gets her wish and also gets a chance to solve the case, aided by hot young Officer Michael "Mickey" Maus. Despite his unfortunate nickname - would any woman really voluntarily become part of Mini and Mickey Maus? - Mini takes a shine to him, but there's no real time for romance, not when Mini has her hands full dealing with Colin's viper's nest full of ex-wives, offspring, former business partners and current business rivals, all of whom had good reason to want to see Colin dead. Who will turn out to be the guilty party? The only way to find out is to read WAITING FOR DEAD MEN'S SHOES, a madcap comedic novel that proves that the Shakespeare Unabridged Globe and the Oxford English Dictionary are still a girl's best weapons."

I LOVE the cover of this book! It is colorful and fun and caught my attention. That being said, I had a hard time getting into the story. Once I got past the first portion of the book, it got better and I was interested to see "who did it" but the beginning was just too much information for me and I found that part to be boring. The end was good and I was a  little surprised. There was some action and of course the details played out in the end.

All in all, it was a good read. I would love to  know your thoughts on this book so please read it and let me know what you think!

***This book was given to me by the publisher in exchange for an open and honest review***
Posted by Unknown at 3:00 PM